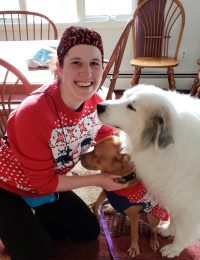 Jillian has worked with animals most of her life. As a teenager she was a local dog walker and during her college years spent her summer breaks working as veterinary assistant/ kennel technician or working at pet stores. She graduated from University of New England in Biddeford, ME in 2009 with a bachelors degree with a focus in medical biology, since then she has been working as a veterinary technician. In 2018, she joined the Oyster River team as the Head Veterinary Technician and became the Practice Manager in 2019. In 2020, she graduated with her MBA at Southern NH University. Outside of the office, Jillian has a husband, a Pitbull mix Ginny, an American Bulldog mix named Roman and three cats (Sora, Titan, and Tigger). She spends her free time running, mostly long distance, and reading comic books.